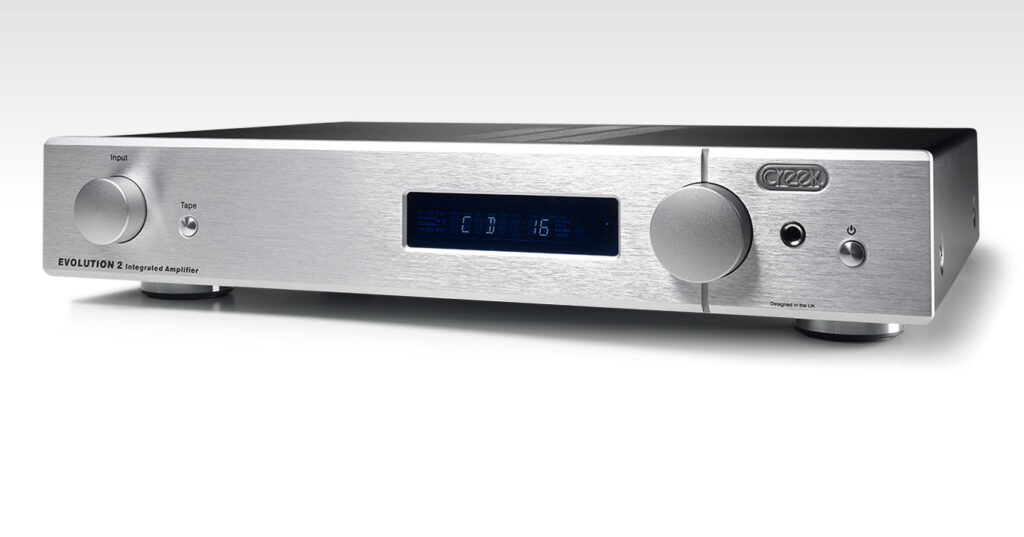 Changes have been made to the amplifier to refresh the design for 2009, to match the new EVOLUTION 2 CD Player. However, there is no reason why it cannot work with the mk1 CD player also.

To achieve 75 Watts power into an 8 Ohms load and >110 Watts into 4 Ohms, the mains transformer has to be big. The Evolution 2 uses a 250VA toroidal transformer, which will provide enough current to almost double its output into 4 Ohms. To achieve high-end sound quality, no expense has been spared.

Separate windings are used for each of the high current high voltage and low voltage, analogue and digital circuits. A high capacity power supply using 20,000 micro-Farads of multiple smoothing capacitors are used to power the left and right power amplifiers and provide a very dynamic performance.

The Evolution 2 uses a high quality, Burr-Brown PGA2311, digitally controlled analogue volume control. This allows the user to adjust the volume accurately, from 0 to -80dB. An analogue style rotary encoder, with 40mm solid control knob, is used to alter the volume from the front panel and display the relative level on a large blue coloured VFD. Position 80 is the loudest and 0 is mute. To amplify the signals into the volume control circuit, a high grade Burr-Brown OPA2134 Op-Amp is used as a pre-amplifier. Signal switching is performed by gold contact relays, which are digitally selected from a microcontroller, similar to the Destiny Integrated Amplifier.

To keep the amplifier safe, it is monitored by discrete transistor circuitry to protect against over-current demand, short circuits and DC offsets. Relays mute the input and separate the loudspeaker output in the case of faults.

Gold plated input and output sockets have been chosen to provide a good connection and appearance for a product at its price point. Loudspeakers are connected with 1 set of 4mm terminal binding posts, with plastic touch-proof covers. The amplifier also has a headphone socket which is becoming an increasingly rare feature of modern amplifiers.

Mains connection is via a standard, fused, IEC chassis plug. A high quality power cord, with suitable mains plug for the country of use is supplied.

Here is a list of things we have done to improve of change the mk2 amplifier.

We use cookies on our website to give you the most relevant experience by remembering your preferences and repeat visits. By clicking “Accept All”, you consent to the use of ALL the cookies. However, you may visit "Cookie Settings" to provide a controlled consent.
Cookie SettingsAccept All
Manage consent

This website uses cookies to improve your experience while you navigate through the website. Out of these, the cookies that are categorized as necessary are stored on your browser as they are essential for the working of basic functionalities of the website. We also use third-party cookies that help us analyze and understand how you use this website. These cookies will be stored in your browser only with your consent. You also have the option to opt-out of these cookies. But opting out of some of these cookies may affect your browsing experience.
Necessary Always Enabled
Necessary cookies are absolutely essential for the website to function properly. These cookies ensure basic functionalities and security features of the website, anonymously.
Functional
Functional cookies help to perform certain functionalities like sharing the content of the website on social media platforms, collect feedbacks, and other third-party features.
Performance
Performance cookies are used to understand and analyze the key performance indexes of the website which helps in delivering a better user experience for the visitors.
Analytics
Analytical cookies are used to understand how visitors interact with the website. These cookies help provide information on metrics the number of visitors, bounce rate, traffic source, etc.
Advertisement
Advertisement cookies are used to provide visitors with relevant ads and marketing campaigns. These cookies track visitors across websites and collect information to provide customized ads.
Others
Other uncategorized cookies are those that are being analyzed and have not been classified into a category as yet.
SAVE & ACCEPT